The results were analysed using empirical data collected by “Withings Sleep Analyzers” and quantitative surveys with some qualitative elements. The survey was completed by the test subjects at three points during the study.

These positive effects lasted at least four weeks after the intervention. The findings of the study provide evidence that the HypnoBox app can be used to reduce the symptoms of insomnia.

It may be expected that regular use of the HypnoBox app helps patients suffering from such sleep disorders.

Good news for users of the HypnoBox app!

The objective of the study was to evaluate the effectiveness of the HypnoBox app, with the help of questionnaires and technical data. Prior to the study, it was hypothesised that sleep quality, the severity of the insomnia, as well as well-being and everyday functioning would be improved when using the HypnoBox app for two weeks before going to bed. It was also assumed that this improvement would be greater compared with test subjects from the Placebo and the No Treatment Groups.

When comparing averages, the Hypnosis Group scored higher values than the other groups overall. 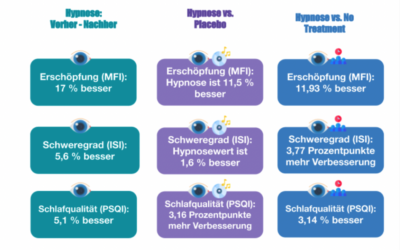 According to the results, users of the HypnoBox app can expect a 17% reduction in their everyday fatigue. Test subjects in the Hypnosis Group experienced an increase in their everyday energy and performance levels. Furthermore, they showed less fatigue, more motivation to be active, and felt physically healthier and more active than before the intervention. No such effect could be observed in the Placebo Group or the No Treatment Group.

Additionally, there was an increase in sleep satisfaction and, during the course of the study, an improvement in falling asleep as well as sleeping through the night.

The Hypnosis Group also leads in terms of sleep quality

It’s YOUR life. You decide what you want to change!
Apple App Store
Google Play Store